Palm Beach Maker Camp – The only Maker Camp in the Southeast!
Our four week Maker Camp has since concluded, and in our estimation, it was a fantastic success. Over the course of the camp, we introduced camp attendees to the following topics:

For the first week of Maker Camp, we introduced the basics of electronics using conductive and non-conductive dough along with the Squishy Circuits kit provided by Make. We purchased Elenco AmeriKit ‘Learn to Solder’ kits, which included a soldering iron, circuitboard, components and a workbook to create a circuit with a siren and blinking LEDs. We also received Learn To Solder Skill Badge Kits (the red robot seen below) from Make as part of the Maker Camp kit. 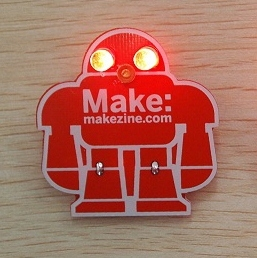 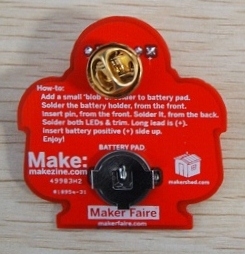 After completing the soldering badge kits, the campers completed their ‘learn to solder’ kits. Our first measure of success in running the camp came when pizza arrived at noon. We told everyone to take a break for lunch, but no one wanted to stop soldering! Pierre demonstrating how to solder

For the second week of Maker Camp, we introduced everyone to microcontrollers by way of the Makey Makey provided by Make and the infamous banana piano: 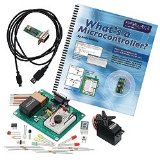 We also acquired a number of Parallax BASIC Stamp Activity Kits which contained a BASIC stamp microcontroller, a project workbook and a variety of sensors and actuators. In addition to learning more about circuitry and electronics, this also provided an opportunity to introduce basic programming concepts. During week 2, campers used the microcontroller to program an LED to turn on and off, experimented with motor controls, created a push-button timing game and wired a speaker to play programmed music. Tim helps to debug code on the microcontroller The third week of Maker Camp consisted of an introduction to robotics using LEGO Mindstorm kits rented from Sheldon Robotics. We developed curriculum to demonstrate how to use the Mindstorm visual programming interface and used it to program a small four-wheeled driving robot and trebuchet. Completed robots and trebuchets were then tested for driving and throwing ability, respectively. It was very encouraging to see the kids wanting to optimize their robots to drive the courses perfectly and to see basic testing and debugging skills in use as they iterated upon their designs! It was also very entertaining to see robots compete. (See video below of robot self-destructing upon course completion). Keith assisting with the build of a trebuchet

Judged by attendance, the final week of Maker Camp was the most popular. We used Tinkercad.com to introduce the campers to 3d modeling, discussed the fundamentals of 3d printing, 3d object repositories (Thingiverse.com) and most importantly, we 3d printed a bunch of stuff that the kids designed! We were fortunate to have volunteers bring their own 3d printers to help print things designed by campers. The Scripps Florida Education and Outreach Program provided a Makerbot Replicator 2, Scooter provided an Airwolf 3D, Matt provided a Printrbot Jr., and Pierre brought a Printrbot Simple and a RepRapPro Mendel. All printers were busy extruding plastic shortly after the campers had an opportunity to learn TinkerCAD! Irene registering campers as they arrived for the 3d printing class 3d printed objects on display before the class Campers examining a variety of 3d printed objects from a Printrbot Jr. Pierre preparing a RepRapPro Mendel to print a camper’s design Finished object (building) inside a Makerbot Replicator 2, designed completely from scratch by camper

Curriculum for any of the four weeks can be found on our Google Docs folder, located here: http://goo.gl/YI66iZ.


Orlando Mini Maker Faire back for a 2nd year!