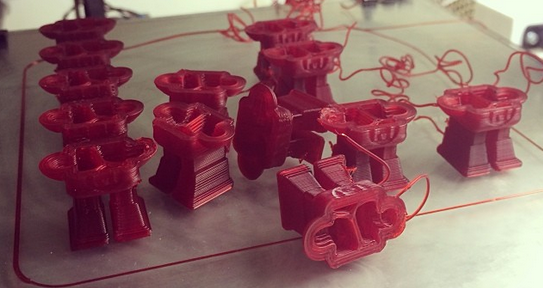 Shortly after becoming completely fascinated with 3D printing last year, I decided to get a printer to use at home. After a bit of research, I settled on the RepRapPro Tricolour Mendel kit. The features and machine specifications were on par with other machines available at the time, but the Tricolour Mendel featured the ability to have three extruders and hotends installed. This would allow multi-color or multi-material prints without pausing mid-print to swap out materials.

The first thing I learned when assembling the frame was that I had not paid close enough attention to the part of the instructions that mentioned components may need fettling before assembly. In particular, many of the parts with holes required cleaning with a drill bit to allow the threaded rods to pass through them. After the parts were cleaned up, the frame went together fairly easily.

Next up the motors and y-axis carriage were installed. Note that the y-axis clamps which hold the belt to the frog came were printed out of PLA. Over the course of a year, the heat from the print bed along with the strain of the belt warped these clamps and caused the belt to loosen. If you’re building a new unit, make a note to print these out of ABS and replace the PLA clamps so you don’t have the same issue.

The last bits of the build included assembling and installing an extruder, hotend, electronics and wiring it all up. Surprisingly, it all worked on the first try even if there were plenty of adjustments to be made.

One thing that wasn’t documented in the RepRapPro build guide was the need for cooling. Without any cooling, PLA has a tendency to curl up while being printed. For a newbie, this can easily give the impression that there is a problem elsewhere (x/y/z axis calibration, hotend/extruder calibration, etc). I found the easiest solution was to place a desk fan directly in front of the printer and to let the desk fan run on the lowest setting. The without fan/with fan differences were fairly astonishing as seen in the first batch of prints seen below.

Finally, the build was considered a success once I was able to print the well known Yoda bust.


From zero to 3D printing